This blog is more than five years old (!) but it has practically been dormant since 2010 when I (finally) left Saraburi to live in Bangkok.

My life in Thailand has changed immeasurably since then. I have another child, a different job, new apartments, different lifestyle, am 30 (plus) etc, so I figured it is time to officially put this blog to bed. The site will remain open -- I'm still amazed that it gets a decent number of visitors and people regularly email me about Saraburi (I'm always happy to help where I can) -- but it represents a different time in my life.

Exhibit A: Look how old these rascals are: 3 and 5, to be precise. 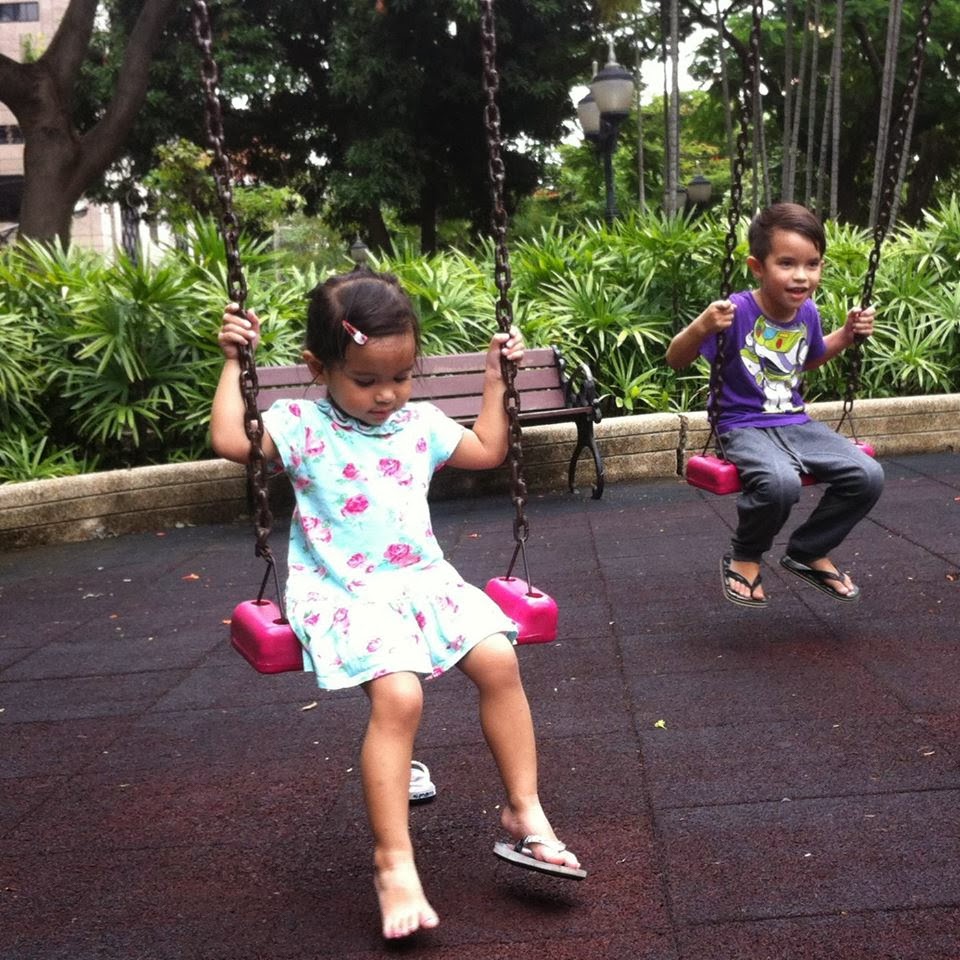 You can find me on Twitter (I'm at @jonrussell), and I'm still very much into blogging: I post personal bits from Thailand and beyond to jonrussell.me, am busy scribbling tech and Internet-related news stories for The Next Web (my employer)... and I occasionally write short notes on tech in Asia at my Insidethenoodlebowl.com blog.

See you around.
Posted by Jon at Wednesday, December 11, 2013 No comments:

Thai floods: I don't have a right to moan but here goes anyway

Well, it's been a while since I've posted anything here on a regular basis.

That isn't likely to change any time soon although right now we're back in semi-ruralness in Saraburi which gives me the urge to update this blog because I've always far more to say here than in Bangkok...both positive and negative.

The reason for this entry here is a little rant about the Thai floods but I'm going to be honest when I say that I don't really have much reason to moan about, as I've been largely unaffected by it.

We've been with my in-laws for a month now after initially popping back for the weekend, which we do every other weekend so my wife's parents can see the kids and we get to a break from urban life. However, a weekend turned into a week...then a fortnight...now a month as we wait to see exactly what will happen in Bangkok (fact: I was without a razor for at least 10 days).

Flooding has massively affected the outskirts of the city -- take a look at Paul Garrigan's troubles and anxiety, for example -- although central Bangkok, where our flat is, has been largely unaffected. However, given that we live some way down the soi (road) with a major canal a two minute walk behind the property, we took the safe option of sitting things out to see what will happen. The possibility of being marooned in our flat with the car submerged in the car park didn't really appeal, even if it may be an unlikely scenario.

So we waited...and waited...and waited and, from what we hear, there is still no water flooding near our property - gah! The boy's school, which was closed for half-term during the first week, is set to reopen after three weeks without classes, because a small but vocal minority of foreign parents appear to have got sick of having their kids at home despite the fact that many do not work and have armies of maids...hmmm.

My return to writing full time (as of last month) gives us the freedom to stay here, or perhaps even go elsewhere, and we fully intend to wait until the flooding is over before we go back - even if the boy misses more school. I'm really not impressed by the school who are clearly trying to avoid giving parents credit for missed classes, I feel sorry for the many Japanese, Korean and other Asian expats most of whom were shipped back home weeks ago - how insensitive of the school and the other parents in Bangkok to plough on. I especially can't believe the gall of the moaning parents in Bangkok who asked the temporarily repatriated Japanese/Korean parents to sign a letter consent allow the school to open, in spite of the fact that their kids would not be able to go.

Without wishing to rant any longer about the school, the wife and I feel like we're ready we've been ready to go back to Bangkok for a few weeks now. For me personally, being stared at has stopped being novel and I'm remembering how we're treated like a new species at the zoo when dare try and go somewhere public with the kids.

There are positives to be here of course. I do enjoy spending time with my wife's parents, I get plied with food and alcohol and enjoy the relaxed atmosphere here too. I've also had the chance to catch up with friends in Saraburi which is great.

As my parents and countless others have rightly said, there is no point going back now when we could find ourselves in a sticky position if things turn nasty with the floods in central Bangkok. So we'll hang on for a little longer, at least until the drive back to Bangkok goes back to being the usual 90 minute route rather than a 4 hour journey of chance through a series of back roads while much of the motorway is closed.

Like I say, I realise I've little right no bleat about the flooding as things could be a lot worse.

Saraburi has already had most of its flooding, although water levels remain higher than usual and some people are still affected by this. We've been out looking and helping a few given that my in-law's house has been entirely untroubled being in a good place despite a river reasonably close-by.

A few weeks ago the wife snapped some pics from the local neighbourhood when the flooding was at its worst. The first two come via a pal who snapped a pic of water under a bridge rising until it almost meets the road. 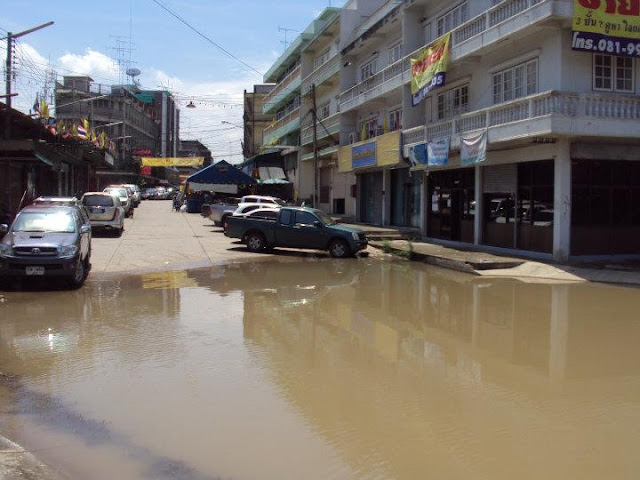 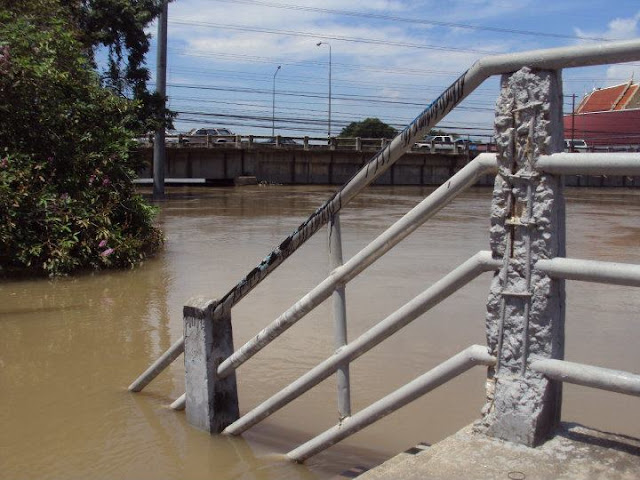 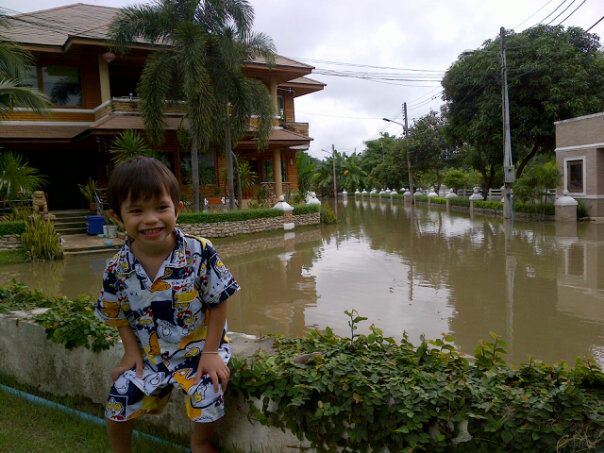 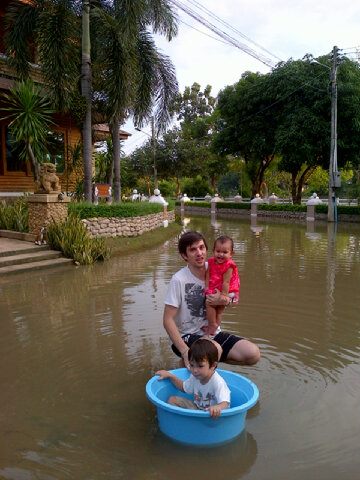 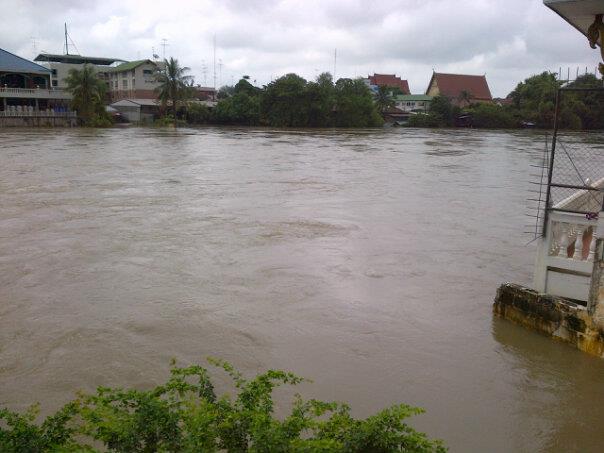 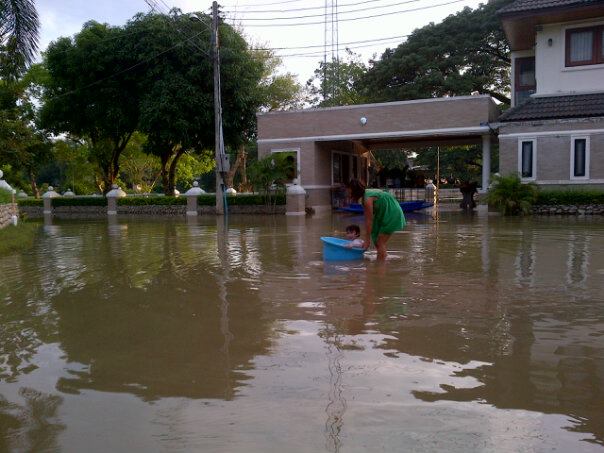 A dose of inspiration for Thai learners

I'm on never-ending quest to improve my Thai skills, both written and spoken. Recently however I've had days during which I barely have time to do more than read the signs on my commute to work, and chat to the office cleaner for a few minutes whilst grabbing a coffee - but every little helps keep my brain ticking over.

I'm looking to crank things up a little - particularly in the reading/writing department - but my motivation got a boost this week as I bumped into a couple of interest items online.

First of all, this excellent Bangkok episode with Learn Thai From A White Guy blogger Brett have some top-notch advice for learning Thai.

Check out the podcast and more of the wise words within here.

Secondly, I ran into www.farangland.net, a hilarious website run by (what looks like) a bunch of farang comedians who speak and act in Thai. It is so convincing that it had my Thai colleagues forwarding the various videos around the office in laughter - not an easy crowd to win over, as my own gags attest.

A few choice vids are below, but check our the website for more...you won't be disappointed!

It has been a long time since Christmas and my last post but I've resolved to be more active here, and with that there is a change in the theme.

The lack of blogging is actually very poignant as life here in Thailand has changed since this site started some two and a half years ago.

With a regular office job, apartment in Bangkok, two kids and all that goes with it times have certainly changed since Jonny Foreigner emerged. No longer am I/we carefree in the sticks, instead life is much more like it would be back in blightly, but with the benefits (and issues) of being in Bangkok - but it's ok because that was the aim all along.

Email ThisBlogThis!Share to TwitterShare to FacebookShare to Pinterest
Labels: admin

Merry Christmas to one and all in Thailand, the UK or where every you may be.

Two years of living in a very Thai province where the day passes like any other make this year's Christmas Day a much more festive event here in Bangkok, plus - now aged two - the little fella is getting into it for the first time which is definitely going to make it a special day (while yours truly is particularly excited at the prospect of a home-cooked Xmas lunch!)
Posted by Jon at Saturday, December 25, 2010 2 comments:

I maintained this blog while living in Saraburi, Thailand from 2008-2010. My life has moved on (and to Bangkok), but I'm still happy to help people with questions about Saraburi and Thailand if I can. You can email me using the address below, or look me up on Twitter: @jonrussell.